We are a small team who dreams big: our mission is to make Conservatory-level piano teaching (and the professional secrets of the Russian Piano School) accessible to everyone. It is also to bring real music back into a world dominated by hurry and simplification, to dispel myths and offer the most complete, clear and transformative piano learning experience to our students.

At PianoCareerAcademy, we help you to discover the true art of piano playing. In all our in-depth tutorials, we go behind the curtain and reveal professional secrets that are usually kept behind closed doors. We offer detailed solutions to all your piano problems and dilemmas - helping you to find joy, ease and fulfillment in your practice. Simply put, we make your playing come alive and shine! 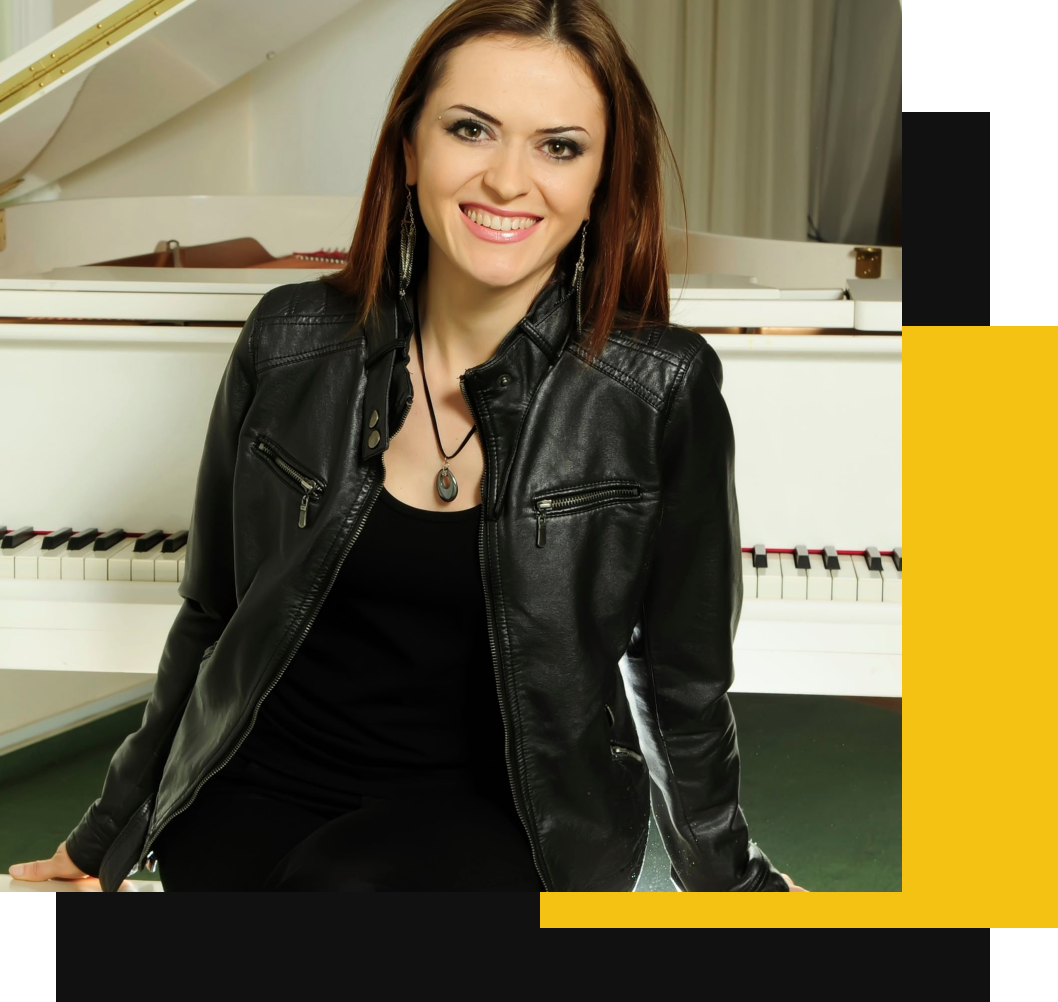 Ilinca Vartic is the founder of PianoCareerAcademy, where she helps pianists of all ages and skill levels find excellence, balance and fulfillment in their piano practice.

Her own piano journey was adventurous and full of unexpected turns: born in the former USSR and trained to become a professional concert pianist from the age of 6, Ilinca never imagined that one day she would teach online, via video tutorials and courses!

And yet it happened - and her passion for languages, technology [and thinking outside the box] is to blame. In 2010, after 20 years of intense studies, almost 10 years of real-life teaching and hundreds of concerts performed, Ilinca realized that something was missing.

Guided by her passion for teaching (and her wide-ranging skillset), one day she took a leap of faith.

Instead of continuing to follow the pre-charted academic path, Ilinca started a piano blog - PianoCareer.com. In English. She learned WordPress and discovered the magical world of cPanel and html.

At first, PianoCareer.com was about sharing her passion for a holistic lifestyle - something that was missing in the professional musical realm she grew up in. After a few months, however, her readers started to ask for video tutorials. They wanted to learn all the secrets of the Russian piano school, from scratch and in-depth!

Another leap of faith (and a new camera) later, Ilinca recorded her first video tutorial. The online dialogue that followed was amazing - and completely unexpected. Two years later (in February 2012), with the support of her wonderful subscribers, Ilinca launched PianoCareerAcademy.com.

In those early days, she had no idea how this adventure would pan out. So she simply focused on her students - creating many hundreds of detailed tutorials inspired by their questions and concerns.

Stand-alone videos and articles, step-by-step Courses, exciting interactive projects - the learning experience on PianoCareerAcademy keeps evolving together with the needs of its members.

Ilinca helps her students to discover the true art of piano playing. She empowers them to grow, excel, shine and find joy in every practice session.

In her tutorials, the East and the West form a harmonious symbiosis:
• on one hand, every student has the unique opportunity to go ‘behind the curtain’ and learn the secrets of the Russian piano school from the comfort of their own home;
• on the other hand, Ilinca makes this professional-level information easily accessible and fun!

Almost 1000 tutorials later, PCA is still the adventure of a lifetime - and YOU make it possible. It is your support, curiosity, love for music and passion for learning that allows our team to create unique resources designed to inspire and transform.

PCA is here for the long run - and the journey continues. Are you on board?

1987-1999. At the age of 6, Ilinca started her professional piano journey by becoming a student of the Republican Musical Lyceum ‘Ciprian Porumbescu’ of Chisinau, Moldova. This Lyceum is a Russian-style specialized musical institution where in-depth musical studies are combined with the standard school curriculum. During the lyceum years, she studied piano with Lia Oxinoit (an amazing teacher who mentored many generations of wonderful pianists). 12 years later, she graduated the Lyceum first of her class (specialization Piano).

1999-2004. Later that year, Ilinca was accepted at the Academy of Music, Theater and Fine Arts of Moldova. At the Academy, she studied with the renowned piano professor Ludmila Vaverco (a student of the legendary Bertha Reingbald, who also taught Emil Gilels). 5 years later, Ilinca graduated the Academy (again, first of her class) with the University degree of Bachelor of Music (specialization Piano).

2004-2006. After graduation, she entered the Masters program (at the same Academy). She graduated with a Master’s Degree in Musical Art (Piano Performance and Teaching).

Ilinca studied piano (professionally) for 19 years: 12 years of Lyceum, 5 years of Academy (University-level education) and 2 years of Masters (post-University degree). During her studying years, she participated in many hundreds of concerts - solo, in various ensembles (duets, trios, quartets, quintets), and also with symphony orchestras.

2005-2012. Simultaneously with her Masters studies, Ilinca started her ‘double’ work career: she became the piano soloist of the National Radio Symphony Orchestra of Moldova, and she also began teaching piano at the Academy.

The orchestra years were magical and very busy: the challenging audio and video recordings, the hundreds of live concerts and many exciting international tours have inspired Ilinca to think outside the box, polish her foreign languages and connect with the bigger world.

In 2005, for about 6 months, Ilinca hosted her own talk-show focused on classical music (at an independent radio station where she was also a broadcast technician).

During the pre-PCA years, she also occasionally worked as an English-Romanian-Russian interpreter at a translation agency.

Just like all roads lead to Rome - Ilinca’s multi-faceted experience led her to PianoCareerAcademy.

Since 2012, she focuses exclusively on PCA - where her work continues to be very diverse: from manager to piano teacher to video creator to graphic designer to website technician.